Expectations were high going into Match Group’s (NASDAQ:MTCH) third-quarter financial report. The online dating technology stock had been on fire in 2019, gaining more than 60% leading up to its earnings. The results were almost everything shareholders could asked for: revenue and profits above expectations, subscriber growth better than expected — what more could investors want?

However, Match Group’s fourth-quarter outlook wasn’t nearly as rosy as investors had hoped for, and the shares cratered by as much as 16% during after-hours trading in the wake of the company’s earnings report on Tuesday. Let’s look at the results and go through my checklist of key metrics to see if the market’s reaction is overdone. 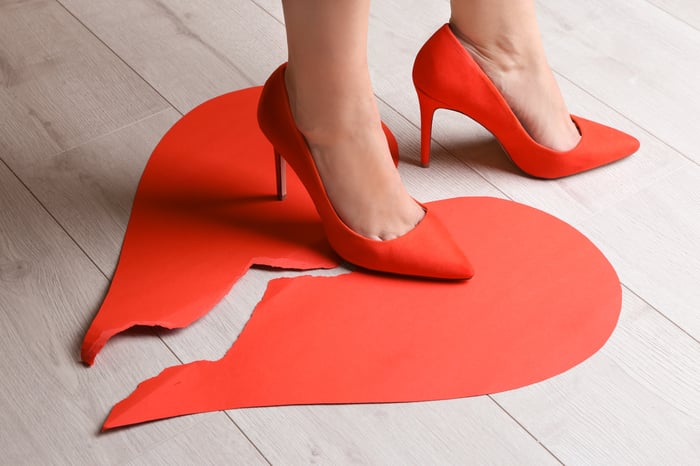 Match Group reported revenue of $541.49 million, up 22% year over year — or 24% in constant currency — accelerating from 18% growth in the second quarter.  That was above the midpoint of management’s forecast range of $535 million to $545 million, while also surpassing analysts’ consensus estimates of $540.58 million.

Another factor that contributed to Match’s revenue growth was average revenue per user (ARPU), which increased by 4% year over year to $0.59. Much of the credit goes to Tinder, which grew ARPU by 9%.

Match produced strong operating income that grew faster than revenue, up 26% year over year to $176.6 million. Operating margin also expanded to 33% from 32% in the prior-year quarter. The company generated adjusted earnings before interest, taxes, depreciation, and amortization (EBITDA) of $206 million, up 25% year year year and surpassing the high end of management’s guidance range, which topped out at $205 million.

This performance resulted in earnings per share (EPS) of $0.51, up 16% over the prior-year quarter, and sailing past analysts’ consensus estimates for EPS of $0.42.

Strong subscriber numbers also contributed to the company’s better-than-expected showing. Average subscribers grew to 9.6 million, up 19% year over year. Growth was strong across the board, up 10% in North America and 29% in international markets.

Tinder was once again the headliner. The dating app grew its average subscribers by 437,000 during the quarter, adding 1.56 million over the past year and bringing the total subscriber base to 5.67 million.

Tinder’s user base is becoming increasingly engaged. On average, users are active on the app more than five days per week, and the number of users logging in seven days per week increased over the first nine months of this year by 30% from the prior-year period.

Retention is strong as well. About 85% of users were still using the app in the following month.

It isn’t just Tinder that’s fanning the flames of love, and Match is working to increase the adoption of its lesser-known apps. Hinge, the relationship app Match acquired earlier this year, has been going gangbusters, up 83% year over year to 2.2 million downloads. OkCupid has grown more than 15 times over the past year, with more than 1.4 million downloads in India alone. Chispa and BLK have grown their year over year downloads by 95% and 273%, respectively.

With all the boxes checked, what’s not to like?

With all the phenomenal growth, some investors chose instead to focus on Match’s fourth-quarter guidance, which was lower than some would have liked.

Some investors scoffed at the guidance. Analysts’ consensus estimates were calling for revenue of $559.29 million, or growth of 22% year over year, and EPS of $0.48, up from $0.39 in the prior-year quarter.

With all the consistently strong growth Match Group has delivered so far this year, it seems somewhat short-sighted to punish the company for not meeting Wall Street’s lofty expectations. Tuck those shares away and check back in another three months.