Tinder looks like it might have met its perfect match as the Match Group (NASDAQ:MTCH) dating app is renewing its original video series Swipe Night for a second season.

The first installment of the four-episode choose-your-own-adventure mini-series where viewers direct the action of characters in a post-apocalyptic future reportedly generated a 26% increase in matches between viewers and a 12% boost in conversations.

And while U.S. Tinder members will get the next set of Swipe Night episodes this summer, the Match service will be rolling out the first season to international markets beginning March 14. 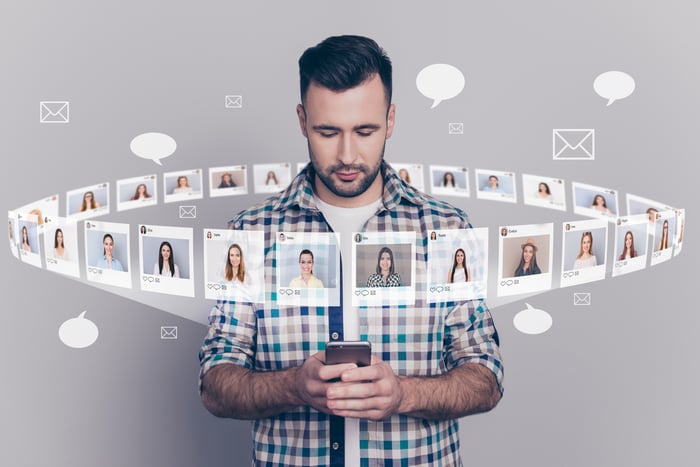 Swipe Night is targeted to Tinder’s 18-to-25-year-old Gen Z subscribers who make up half of all members. “We know Gen Z speaks in content, so we intentionally built an experience that is native to how they interact,” Tinder’s chief product officer Ravi Mehta said on the Tinder blog.

The videos are shot so they can be viewed in vertical format for mobile devices, and the first season didn’t pertain to the app or dating per se, but rather explored the relationships of the characters who were trying to survive a five-minute, end-of-the-world scenario.

Viewers had seven seconds to choose what actions the characters took. Those choices were posted to users’ Tinder profiles to serve as conversation starters with individuals who made similar decisions.

A tinderbox of turmoil

The company has found a unique and interesting way to separate itself from the video content that currently swamps mobile platforms via Facebook, Instagram’s IGTV, and Snap Originals. It also allows Tinder to differentiate itself from the recently launched Facebook Dating service, which many think could hamper Match’s dating app dominance.

Meanwhile, Match has come under greater scrutiny in recent months:

Its exposure to the coronavirus outbreak is largely unknown, but it could have an impact on users’ willingness to go on dates. In a pop-up message to users, Tinder is actively encouraging members to take precautions like washing their hands frequently, carrying hand sanitizer at all times, and maintaining a “social distance” at public gatherings.

There are no details yet about what the series will tackle this time out, though user engagement will undoubtedly still be featured prominently. Yet increasing engagement through more innovative content will allow Match Group to further drill down to find out how using technology to generate greater interaction can convert to more paying members.

At 35 times earnings, though, and with analysts expecting them to rise just 7% this year, Match Group may need to come up with a better story for investors on why its stock should not still be considered overvalued even after a 20% decline so far in 2020.