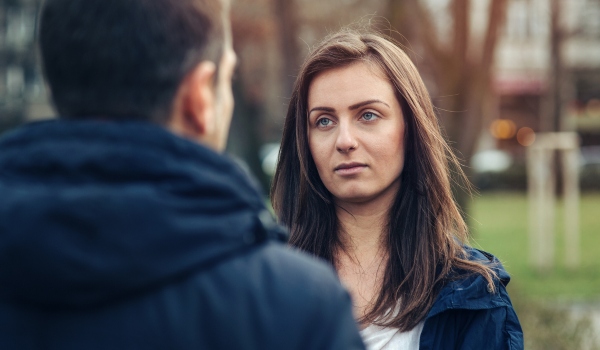 Casual relationships require everyone to be on the same page. It’s another entirely to keep someone around just in case things don’t work out with another partner.

And that gets even more egregious when you know for a fact that this other person has feelings for you — feelings that you don’t return, that you know you won’t return — and you’re keeping them around because you know they’ll be there until you’re ready to move on to bigger and better things.

Leaving aside the question of the ethics of the situation — which is a whole different ball o’ wax — part of what’s unfair to H is that you’re stealing time from her. Right now, she’s investing her time and energy in you, not knowing that you don’t feel the same way and plan to leave her when you find someone you do love and want to be with. That’s time wasted for her, time that she could spend finding someone who does return her feelings. Instead, you’ve put her on a track where she will eventually find out that you — and there’s no softer way to put this — were using her. That’s gonna hurt. That’s going to hurt her a lot. And worse: she won’t get the time or feelings back that she’s expended on you.

The thing that you can do to make everyone happy in the long run is very simple: you end things with H. You tell her that you enjoy spending time with her, that you have affection for her and you enjoy her company… but you and she want very different things from this relationship and you don’t feel like it’s working for you. It’s not the relationship that you need, it’s not the one that she needs and you respect her too much to want to waste her time when it’s clear that you two are going in different directions on this. And while you’ll always care for her and look on what you two’ve had with fondness, you feel that the time’s come to end things.

What you don’t do is tell her about your plan to keep her as your back-up. There’s never any need for her to know this, and telling her — even in the name of “honesty” — just causes unnecessary pain. Honesty without tact or consideration is just cruelty.

And you also don’t accept things if she says that she’s ok with an imbalanced relationship. Her saying she’s ok with being hurt by you like this doesn’t make it better; it just makes the terms of your relationship even worse. “Yes, I know it’s tearing her heart out, but she says she’s cool with it” is a dick move.

Do H and yourself a favor. End this now. She needs to be free to find someone who is going to want her back the way she wants him and you need to not treat people as your “in case of dating emergency, break glass” relationships.

So I’ve been happily single for a while, and I’m not looking for a relationship, but I do miss sex. I figured that with all the online options for dating, it shouldn’t be too hard to find people who are upfront about their desire to keep things casual – and I was right! There are attractive people on Tinder and OKCupid who explicitly say they want casual fun or hookups or whatever. So far so good – I want someone who’s on the same page.

Here’s the snag, though – I’ve never had casual sex, flings, one-night-stands, anything. All the sex I’ve had has been in long-term relationships, and I’m a huge dork and couldn’t flirt my way out of a paper bag. So when I see a Tinder profile that says “Just looking for something casual,” I freeze up. I realize I wouldn’t know what to say to this person (especially if that’s literally the only thing in their profile).

Dating for relationships is hard, but at least I feel like I kind of know how it works – you try to get to know someone, find your common interests, slowly grow more comfortable. It doesn’t help that everyone I’ve dated has been introverted and shy like me, so in every past relationship it was months before we had sex. Casual sex doesn’t seem like a long game, though – aside from what happens in movies, I literally can’t imagine what words are involved when you meet someone and end up having sex with them on the same or the next date.

How does this work? What are the norms and expectations of the casual dating scene? What are the common-sense things a newbie might not know? I feel like I need a tutor or a class or something.

You have legitimate reasons to be confused, GNS, because — as we’ve seen frequently on here — “casual” means different things to different people.

Now, as a general rule, a casual relationship means one with no expectation of commitment. Most folks will agree on that. However, it’s the details where people often get tripped up.

For some folks, “casual” means that not only is there no expectation of commitment, but there’s also no expectation of much of a relationship outside of sex; minimal dates, minimal contact, mostly getting together to bang and go. For others, a casual relationship is functionally a friends-with-benefits arrangement. For some it means that you’re dating, but with the understanding that this isn’t leading to marriage or children or living together, while for others it means that you’re not exclusive. For some, it’s a relationship without labels (no calling each other boyfriend/girlfriend/partner, etc), while for still others it’s what you have before you decide you’re settling down.

Needless to say, it’s very easy for two people’s idea of “casual” to bump up against one another in unpleasant ways and leave people hurt, confused and upset. If your idea of casual was that you simply weren’t heading towards marriage but you did expect monogamy and your partner’s idea was “we bang, that’s it”, you two are gonna have a bad time.

This is why it’s important, even in a casual relationship, to define your terms and have a version of the Defining The Relationship talk, where you discuss just what this means, what you expect and what you are open to.

Of course, there’re plenty of occasions where this doesn’t come up. If someone’s just looking for a hit-it-and-quit it hook up or a one-night stand, then there’s a lot less to discuss; you’re likely not seeing this other person again, so there’s no real need. But if it’s someone you enjoy spending time with or sleeping with and you’d both like to do it again and on the regular, then yeah, it’s important to at least lay some groundwork with a “just so we’re both on the same page” convo.

But the thing to realize is that casual sex and casual relationships aren’t the same thing as hooking up on the first date. When you both decide to have sex isn’t a function of the type of relationship, it’s a function of desire, trust and acceptance of risk on both sides. Couples who were explicitly looking for long-term commitment are just as likely to stay together regardless of whether they decided to bang on the first date as the third or the tenth. People looking for something casual may decide to wait a couple of dates before having sex. Hell, people can know each other for years or decades before deciding they want to have a NSA hook-up or two.

So in your case, when you find one of those sexy singles in your area who’re looking for a casual fling… find out what casual means to them. The way that I prefer is to set up a pre-date date quickly — “Hey, I really find conversations on dating apps to be shallow; would you like to meet up for a quick coffee? Here’re the times I’m free, you pick the day and the location” — and over the course of that date, bring up what you’re looking for and what you’re open to. Something along the lines of: “So I’m recently single and I’m not in the market for a committed relationship; I’m mostly looking for people to do fun things with. What about you?” This has the benefit of helping establish whether you have in-person chemistry or not, whether you want the same things and if you two are interested enough to try a proper date and/or hooking up. If your expectations line up and you’re into each other, then blessings on you both. If not, you’re just out the price of a cup of coffee and 15 to 30 minutes of your time, instead of days of weeks leading up to conflict and hurt feelings.

Just remember though: a casual relationship isn’t a license to treat your partner casually. There are people out there who think that a casual relationship means not having to give a shit about the person they’re seeing. These are people who should be chucked out of your dating pool with great force and furious abandon. If someone is treating you badly or not paying attention to your feelings or comfort, that is not someone you want to date, even if this relationship isn’t going anywhere. Anyone worth sleeping with is someone who — at the bare minimum — is going to treat you with respect and compassion.

Previously published on doctornerdlove.com and is republished here under permission.

Talk to you soon.

If you believe in the work we are doing here at The Good Men Project and want to join our calls on a regular basis, please join us as a Premium Member, today.

All Premium Members get to view The Good Men Project with NO ADS.

Need more info? A complete list of benefits is here.